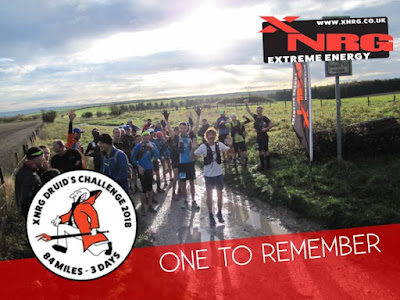 This weekend I signed up to be a member of the support team on the Druid's Challenge ultra running event in the Chiltern Hills. My friend Matt was running the three day, 85 mile event. I was allocated to help with set up and checkpoint duties on the Saturday and Sweeper on Sunday.

The Druid has been going for 12 years. It is organised by XNRG, a family business that 'help people challenge themselves and break through their mental and physical barriers, whilst providing peace of mind with expertly run events, going the extra mile for every competitor.' They also put on the Pilgrim Challenge and a number of charity events raising money for Humanity Direct.

To get there for the 7 o'clock start I left London at 3:30am. The benefit of this was clear roads and the ability to drive through the centre of London with no Congestion Charge to pay. I arrived at the agreed meeting point outside the village of Watlington.

The first wave of competitors were walkers. They were brought from their overnight accommodation in minibuses and given a short talk before heading off for the second day on the trails. They were facing 27 miles along the Ridgeway having completed 28 miles the previous day, and with 30 more miles the following day. That said, they were in great spirits.

Ian Chappell gave them a brief briefing while I guided them to the relevant devices to ensure their timing chips were activated. Off they went into the grey, cold morning. At 8 o'clock the slower runners came through followed by the faster runners at 9 o'clock. Despite the overcast conditions there was no sign of rain and although a little muddy the trails were good for running on. I collected some signage that led to the Ridgeway and then headed to my checkpoint outside Compton. 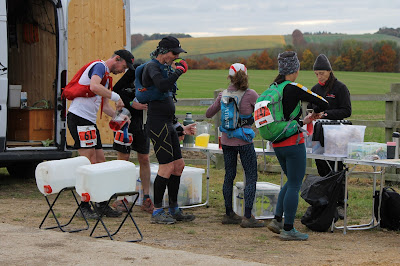 Marie-Ann was already set up on the trail with tables groaning under the weight of Haribo, sausage rolls, chocolates, cakes and drinks. The event is cup less to reduce waste so squash, water and hydration tablets were available to refill bottles. Her dogs bounded around full of excitement at being out in the countryside for a day. Her converted van provided seating, hot water and even a wood burner.

It wasn't long before the first runners arrived at 11:30. This was checkpoint three so they were well over half way by this point and flying. I pulled out my digital SLR and took some photos in between helping refill bottles and urging them to eat. Over the next four hours the whole field passed through. We then packed up and made our way to the overnight accommodation in Didcot Leisure Centre.

Part of the experience is eating and sleeping with other runners (you know what I mean!). The main sports hall was full of dishevelled runners in various states of repair. Mats, camp beds, air beds, sleeping bags, mud caked trainers, sweaty vests, towels and running accessories were scattered across the expanse. People were laying in their beds, some were stretching, while others hobbled around in small circles groaning and whimpering. It was not unlike a scene from a war film albeit with colourful running kit in place of earth toned camouflage gear.

That said, the atmosphere was buzzing. There was such a positive vibe as people shared experiences and advice, encouraging one another on their achievements and ability to finish. Even the fastest runners were making time to sit down with those newer to the events and listen to them, offering suggestions and inspiration. You don't often see that.

A feast of protein and carbohydrate - otherwise known as dinner to non-runners - refuelled tired limbs and filled empty stomachs sick of sugar and E numbers. There was time for a talk from a coach about the Marathon de Sables and a few beers before lights out at 10pm.

A disturbed night came to an end at 6am as the first group packed up and prepared to leave after breakfast. I was sweeping. This basically involves following behind the person furthest from the front - I don't like to think of anyone as last in this type of endurance run - and collecting signage that has been put out to direct people along the route. This is mostly tape tied to posts but also a few large warning signs for passing traffic.

My fellow sweeper was Sarah from Henley. We met in a car park on Ridge Hill and set out ten minutes after the faster runners at 9:10. We had never met or spoken before, but soon struck up a conversation, inevitably about running.

Throughout the day we would cover many subjects from work and family to life goals and food. It was a real pleasure to spend the day with someone so personable, fun and interesting. You never know who you're going to get, and nine hours with someone you don't get on with or who doesn't want to talk would be a little uncomfortable. Not that this is likely as runners are a pretty good bunch. Whether she feels the same, you'll have to ask her. Nine hours listening to me droning on may not have been as pleasant an experience for Sarah. 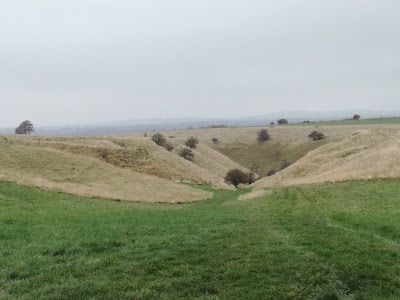 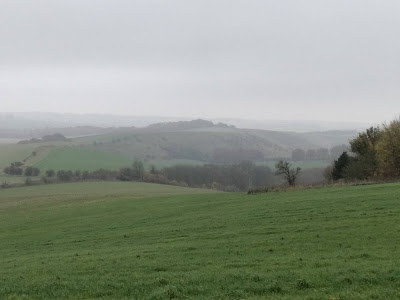 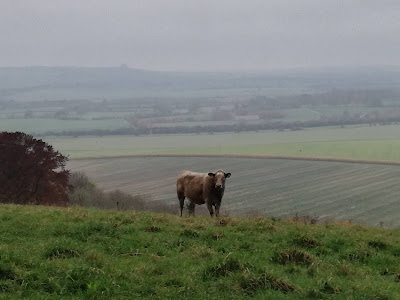 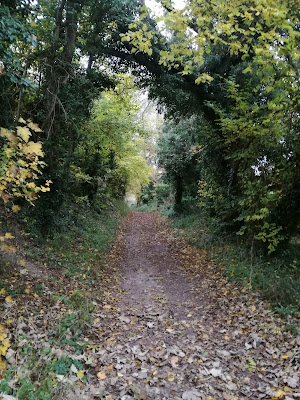 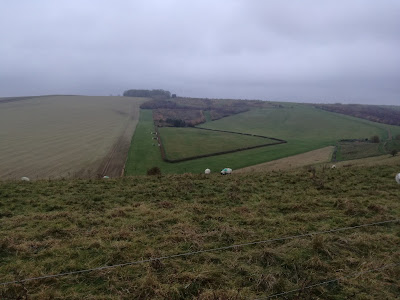 The views to either side of the Ridgeway at this point were stunning, and remained that way for the length of the route. We could see for miles in both directions, north and south of us, as we headed west. A grey mist lay over the horizon. It was lit up at various points by the bright orange, yellow and red of tree canopies arrayed in autumn leaves like flames of fire rising through a smoky woodpile. 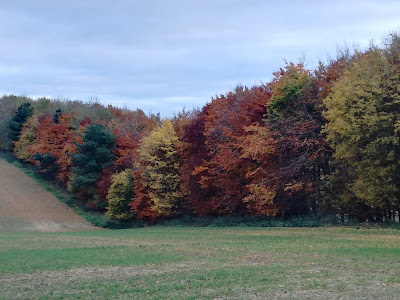 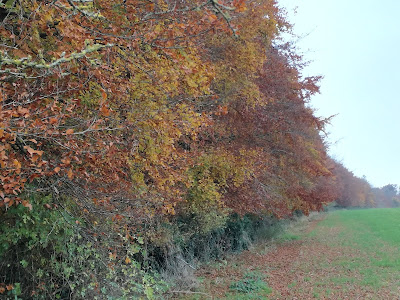 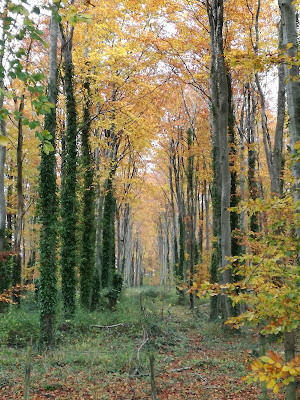 We passed a monument to Lord Wantage and other groups of runners and dog walkers. We were moving at a steady pace. It was important not to catch the first person too soon, but also we didn't want to keep the checkpoints waiting for long after that person had passed through. We were doing 12 minute miles with stops for photographs and the toilet (me - too often). It was like a nice day out rather than an ultra run. 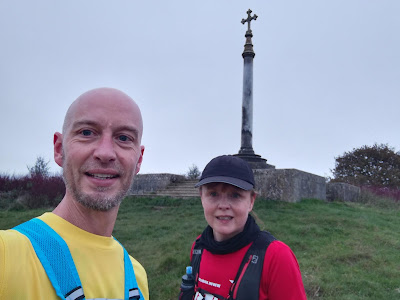 One time we stopped and took a short detour was to see Uffington Castle on the highest point of the Ridgeway. This is actually the remains of an iron age hill fort. It stands above the famous chalk white horse which we could glimpse below us. Paragliders and kite flyers were also there enjoying the gusty winds that blew up the steep edge of the Ridgeway. 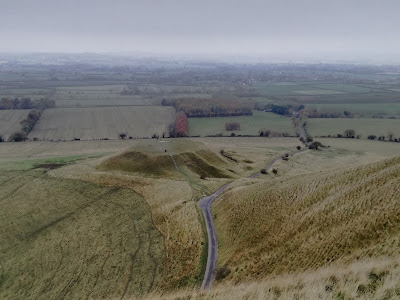 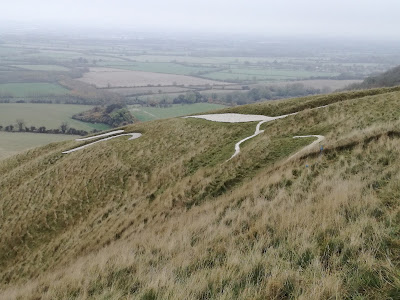 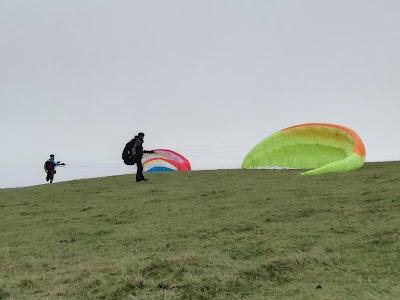 Not so pleasant was Fox Hill. Here the path descends and you are unceremoniously thrown out of the natural world onto a series of busy roads to cross the M4. After hours surrounded by birdsong and rolling hills it was quite a shock to the system and we were glad to get back on the ridge a couple of miles later.

As we passed Liddington Castle we caught up with the tail of the field. Helen has been suffering with a painful shin and had been forced into a slow walk. She bravely kept going despite the pain and was determined to finish. We had ten miles to go.

A slow few miles followed into the final checkpoint. By now we had cooled significantly and were wearing all our layers, hats and gloves. The hot coffee which was provided tasted better than any coffee I have ever had before.

A word on the checkpoints. These guys are incredible. They give up their time to stand around for hours in the cold to ensure there is a warm welcome, food, water, medical supplies and, if needed, transport for those who have to withdraw. They are always full of positive energy, words and actions. The race couldn't happen without them. 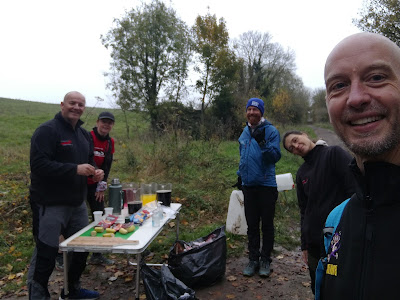 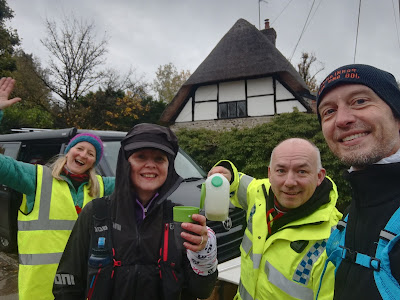 Having completed the first 20 miles in four hours, it took another four hours to walk the last 10 miles. It didn't matter though. We were having a great time and it was inspiring to see Helen keep on keeping on despite 85 miles, approaching darkness and intense leg pain. We finally arrived at the finish in Overtown to cheers from the remaining crew. They kindly allowed myself and Sarah to have a lovely wooden medal then took us back to our cars for the drive home. 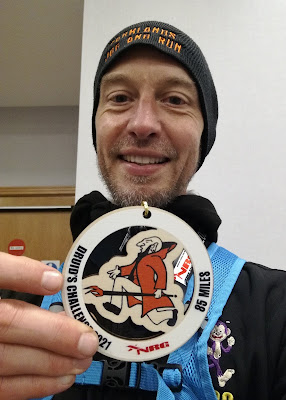 I was really impressed by XNRG. Neil and Anna Thubron and Neil's dad Brian, Richard Hurd, Ian Chappell and the drivers were full of concern that everyone always had what they needed when they needed it, whether support team or runners.

They provided a welcoming environment, were approachable, kind and generous with their time and energy, and were never too busy despite the constant demands on them. Their passion for running is obvious and the work they do for charity admirable. I strongly recommend their events and will be doing more myself in the future.

Here are a couple of shots of the runners on Day 2. 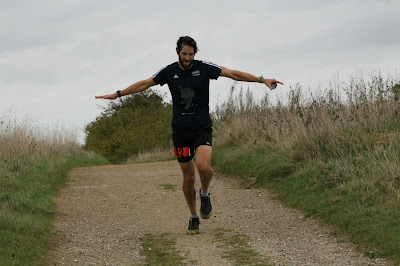 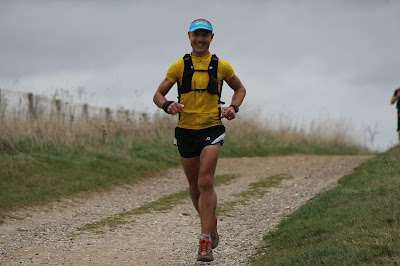 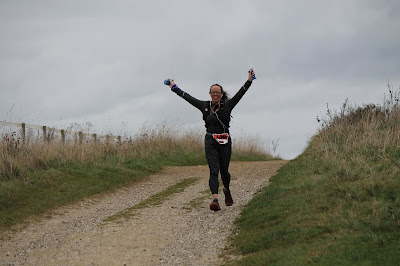 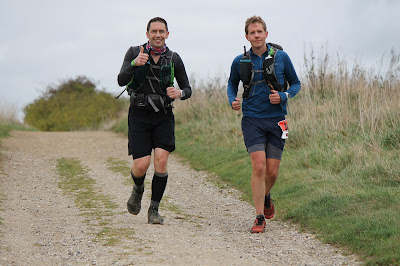 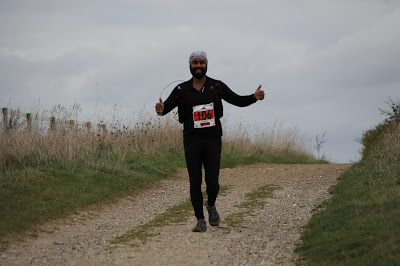 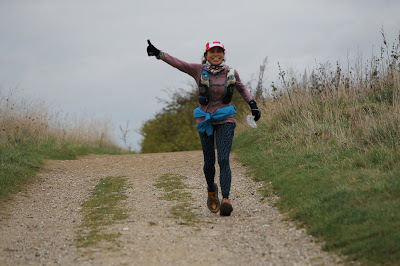 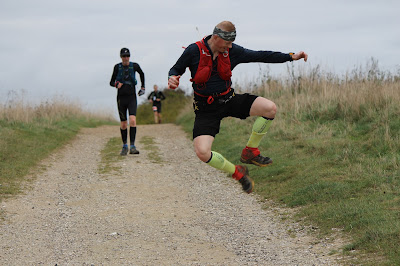 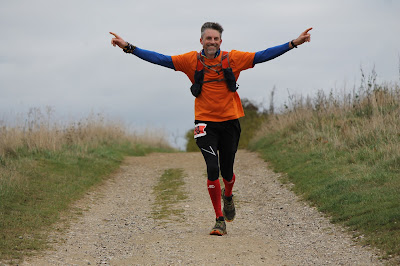 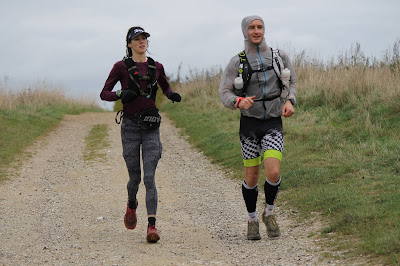